Just across the Ohio River from Gallipolis is Pt Pleasant, West Virginia, site of a battle that took place on October 10, 1774, a conflict some historians consider the first battle of the Revolutionary War.  William “Swago Bill” Ewing would have remembered that fight when he crossed the Ohio in 1810 on his way to Raccoon Township, north of Gallipolis.  He had participated in the Battle of Pt. Pleasant 36 years earlier, when he was 18.  Swago Bill spent the rest of his life in and around the small town of Ewington, where he died and was buried in 1822.

These Pocahontas James Ewing descendants, who migrated from the Shenandoah Valley via the Cumberland Gap were descendants of John Ewing of Carnashannagh. They were joined by descendants of another early Scots-Irish immigrant – James Ewing of Inch – who had immigrated to the Upper Chesapeake Bay area and then migrated via Braddock's Road, now known as the National Road, Route 40, to the area around Pittsburgh, Pennsylvania. 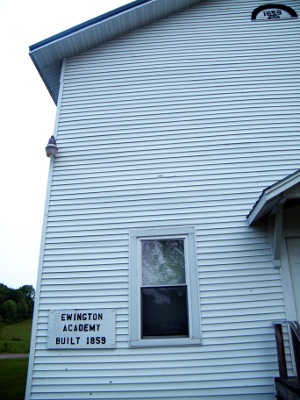 In September 2012 Ewings will gather in Gallipolis, Ohio to acknowledge the family’s continued western migration.  In the proposed program are genealogical and historical presentations, caravans to various local historical sites, such as the Battle of Pt. Pleasant, and opportunities for self-guided tours to Ewington, Vinton, local cemeteries, and other venues important to the family’s history.  As in the past, the research room will be open at specified times, and there will be ample time for reminiscing.

Registration: The early-bird (prior to August 15th) registration fee is $175 for adults and $100 for children under twelve.

Program: The gathering's program will include genealogical and historical presentations, caravans to various local historical sites, such as the Battle of Pt Pleasant, and opportunities for self-guided tours to Ewington, Vinton, local cemeteries, and other venues important to Ewing family history. As in the past, the research room will be open at specified times, and there will be ample time for reminiscing.

Presentations: There will be several presentations on Ewing genealogy-related topics, among them: a status report on the Ewing Surname Y-DNA Project by David Neal Ewing; an analysis of the children of Pocahontas James Ewing by Wallace K. Ewing; and a discussion of the value and techniques of tombstone rubbing by Jane and Wallace K. Ewing. In addition, luncheon and dinner talks by Henny Evans (Gallia County Genealogical Society) and Dewetta Gay (Local Historian) will discuss the area's history and Curt Witcher (Manager, Genealogy Center, Allen County Public Library) will talk about the ways in which his department preserves genealogical documents.

Entertainment: Among the meals

included in the program will be a banquet on Saturday night, September 23rd. The Renaissance Singers will perform at the banquet. The ensemble's home is Chillicothe, Ohio. Barb Nowlin, Director, says the group will feature songs from Scotland and Ireland. One of the singers, Barbara (Ewing) Seigneur (the third person in the second row) is a great6-granddaughter of Alexander Ewing, born about 1708.

Lodging: The Quality Inn in Gallipolis, the venue for the 2012 Gathering, will hold rooms for us with a rate of $79 per night, single or double occupancy, until August 15, 2012. To make your reservation, contact the Quality Inn at +1 740.446.0090. Be sure to mention you will be attending the Ewing Family Association Gathering, and if you are entitled to a discount, such as a senior or AAA rate, request it from the registration clerk.

The 2012 Gathering's Caravan-style Outing will visit many sites of current and historical interest:

Pt Pleasant is a city in Mason Co., West Virginia, at the confluence of the Ohio and Kanawha rivers. It is the county seat of Mason County and the principal city of the Pt Pleasant Micropolitan Statistical Area.

Gallipolis is one of the fifteen townships in Gallia County. It's located in southeast Ohio on the Ohio River. Gallipolis is the second-largest community in the Pt Pleasant Micropolitan Statistical Area, which includes all of Gallia Co., Ohio and Mason Co., West Virginia.

The Shawnee Village murals were officially dedicated in the fall of 2011. The murals, which were painted by artist Robert Dafford, are 260 feet long and approximately 15 feet high. A special paint, imported from Germany, was used for the murals in order to enable moisture that is wicked up through the foundation of the floodwall to escape through the painting without damage. In addition to pictures, the murals feature an interactive historical lesson complete with an audio presentation.

At the junction of the Ohio and Kanawha Rivers stands this monument which commemorates the frontiersmen who fought and died at the Battle of Pt Pleasant. This battle was fought with Chief Cornstalk on October 10,1774, and is recognized as the decisive engagement in a proactive series of Indian wars. The name 'Tu-Endie-Wei' is a Wyandot word meaning 'point between two waters'. The Pt Pleasant Battlefield Monument was erected on October 10,1909 as a tribute to a battle fought on this same date in 1774.

Our House Tavern
From The Ohio Historical Society

Our House – a three-story brick tavern in the Federal style – was built in Gallipolis by Henry Cushing in 1819. The tavern boasted, in addition to its taproom, dining room, and other usual facilities, a large ballroom for social functions. On May 22, 1825 General Lafayette visited Gallipolis and was entertained at the tavern. Gallipolis still celebrates Lafayette's visit with a ceremony each spring. The Cushing family owned and operated Our House until 1865. The restored tavern and inn contains period

furnishings and offers a display of early Americana. Visitors today will step back in time to when proprietor Henry Cushing invited weary travelers to stay at his inn.