The EFA depends heavily on the labors of its volunteer leadership, including its Board of Directors, Officers, and Activity Coordinators.  The Chancellor and Board were elected by the membership at the 2016 Gathering, while other officers were elected at the 2016 Board meeting.

The Board is elected at EFA's general meetings, normally at its biennial gatherings.  The immediate past President of the EFA is an ex-officio member of the Board.

The Chancellor is elected by the membership to be the chief executive officer, while the Board Chairman, Secretary, and Treasurer are elected by the Board, according to the EFA Bylaws.

The EFA sponsors a number of special activities which are under the direction of our Activity Coordinators.  These are posts are appointed by the Board of Directors.

Our leadership positions are filled by persons of wide experience and high dedication, as the following short biographies will show.

Karen Avery
Genealogist and Board Member

In 2008 Karen began serving on the Board of Directors. She also has served as Genealogist since 2009 and keeps a personal Ewing database containing more than twelve thousand Ewing-born individuals. Karen will be happy to search her data base in order to help others in their search for ancestors.

Born and raised near Fort Wayne, Indiana, Karen is the wife of Commander Robert Avery, USN, Retired. Duty stations during twenty-four years of military service included tours on both the East and West coasts, Gulf of Mexico, Guam and Hawaii before the family retired to Northern Virginia in 1984.

Daniel C. Ewing has belonged to the Ewing Family Association since the Gathering in Fort Wayne in 2006.  His interest in family genealogy goes back to the childhood story that his ancestor came from Ireland.  Dan didn’t really pursue the story until perhaps twenty years ago when he began his search at the Fort Wayne Library's Genealogy Center.  There he documented the arrival of his great-grandfather, George Alexander Ewing and his brother Robert Shaw Ewing in 1850.  The boys stayed with their Shaw uncles in Michigan, where the family stayed for four generations.  Dan has studied his branch of the Ewing family and a few other related families.  George A. Ewing’s father, Samuel, was born c1790 in Londonderry, married Jane Shaw c1830 and died March 1845 in Londonderry.

Dan lives in Fort Wayne, Indiana, married to Lois, has four children and five grandchildren and is active in a Consulting Engineering Practice with his former employer. This year Dan and Lois will celebrate their 60th Anniversary.

David Neal Ewing has been a member of the Ewing Family Association since 1996 and has served as its Chancellor from 2006 to 2012. He previously served as Chair of its Board of Directors from 2004-2006. He is also Administrator of the Ewing Surname Y-DNA Project, which he founded in 2004, and he is a regular contributor to the Association's Journal.

Dr. Ewing has a private practice in clinical geriatric neuropsychiatry in Albuquerque, New Mexico. He received his M.D. degree from the University of New Mexico and did his residency training at the University of Michigan Hospital in Ann Arbor, Michigan.

Martin S. Ewing is the great-great-great-grandson of Noble Ewing (ca 1783-1846). A member of the Association since 2008 and elected to the Board in 2012, he has established the Association's Forum and the current web site, building on the work of Bill Riddle. His computer has data on over 3,000 forebears, mostly English, but a select few are Ewings and Scots-Irish.  His branch of the Ewing family centers in Massachusetts. The likely connections to other American Ewings are the subject of much of his genealogical interest.

Martin is retired from careers in astronomy, engineering, and information technology. He graduated from Swarthmore College and the Massachusetts Institute of Technology. He maintains an active interest in amateur radio. Martin is married to Eva Reissner Ewing; they live in North Branford, CT.

Wallace K. 'Wally' Ewing considers himself a lifelong resident of the Grand Haven area, although his schooling and career has taken him to many other places around the world.  He was elected Chancellor and Board Chair of the EFA in 2012.

Upon retirement from the Red Cross in 1995, Wally worked as Curator of Education at the Tri-Cities Historical Museum for two years and subsequently became a volunteer for the Museum. In recognition of his work, the Museum twice named Wally 'Historian of the Year'.

In August, 2006, Wally married Betty Jane Pickel Livingston, and, after a two-week honeymoon in England, the newly-married couple flew to Dalian, China, where Wally taught English writing and literature to Juniors at Dongbei University of Finance and Economics.

Wally and Jane returned to Grand Haven, where Wally continues to research and write about local history and family genealogy. He has co-authored several books and articles on local history, including Grand Haven Then and Now, released in late 2009, and “Poet in Repose,” an article about the dozen or so summers that the poet Edgar Lee Masters spent in the Grand Haven area. He has also published Our People, Their Stories, bios of local people; Covenant Life Church 1988-2013, a 25-year history; and Substance and Light, 75 Years of the West Michigan Symphony. In 2011, Wally published three more books: Ace in Spoken English, a text book for Chinese university students learning English; Slaves Soldiers Citizens, African Americans in Northwest Ottawa County; and From Home to Trench, the Civil War Letters of Mack and Nan Ewing. 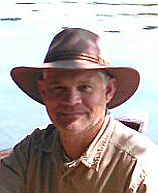 I go by the nickname of "Major" as a result of my passion for Living History and the rendezvous name I was given. I was born in Mt. Pleasant, Michigan in 1957.  My mother is Isabel Maria born in Arecibo, Puerto Rico in 1937 (surname: Perea-Urdaz), and my father is Walter Lavern Ewing born in a farmhouse near Dewitt,  Michigan in 1931.

I grew up all over the world during my father's Air Force Career (1950-1973) and attended 12 different schools, including 4 different High Schools.  I graduated in 1975 from Shepherd (Michigan) HS.

I then attended Central Michigan University where I graduated with a BS (1979) and MS (1980) in Outdoor Recreation and Field Biology.  I enjoyed being part of the Orienteering Team and maintaining my involvement with immediate family, playing in various bands, and enjoying outdoor adventures.  I was also commissioned as a 2nd Lt in the Army through CMU's ROTC program.

I spent 1979-1995 as career Army officer in the Infantry and then Quartermaster Corps, travelling to many parts of the US and some overseas tours.  I continued to participate in outdoor adventures, enjoyed travelling and visiting new places and people, and was involved in the Boy Scouts and church.  I retired in 1995 as a Major.

I transitioned into my second career, and began teaching science (Biology, Earth Science, Environmental Science, Outdoor Education), starting in Texas and ending up back in Michigan.  I enjoy incorporating strategies such as: Field Labs, Experiential and Challenge Based Learning, Service Learning Projects, and Cooperative Learning Groups.  I have coached Cross Country and sponsored Drum Lines.  I currently teach High School Science at Quest HS in Fremont, Michigan and am especially working with at risk students.

I now live an hour from work with my golden-hearted wife Rachel (also an educator) and our Golden Retriever in Canadian Lakes, Michigan, a pleasant “woods and water” type resort community.  My two sons (from first marriage) are grown up and are also military veterans; living in North Carolina and Germany.  They both are now starting families of their own, and I am a proud Grandpa-- of one grandson so far.

Overall I enjoy:  outdoor recreation activities in all seasons, especially fishing, canoeing, camping, and hunting; playing musical instruments and leading dances, primarily ‘traditional folk’ style; conducting folk music and art workshops as part of the Wheatland Music Organization; being involved in my church activities, in particular playing drums in the Praise Band. I especially have a passion for performing/conducing Living History Programs as a re-enactor (with my wife), especially as a Voyageur of the Great Lakes Fur Trade era, and actually canoeing the Great Lakes and doing interpretive programs with a group of Voyageur re-enactors in a replica 34ft Trade Canoe.

I will be retiring from teaching in a few years.  I anticipate a ‘third career’.   I hope to teach Community College classes, and perform/conduct Living History Programs around the state.  Thereafter, my wife and I plan to volunteer at local community events, travel abroad, travel south for the winter, enjoy more outdoor adventures, and stay involved with our family.

I look forward to being an active member of EFA and interacting with my ‘newly found’ relatives – our DNA and family heritage have brought us together.

Terry and her husband Tom, have lived in Waterford, Michigan for most of their 44 years of marriage.  They have 2 children and 3 grandchildren.  Terry worked for GMAC Mortgage Corporation until GM's demise in 2008.  She was a nationwide corporate trainer for Operations and Sales.

Terry Ewing Schulz found Clan Ewing of America back in the late 90's when she began her genealogy journey.  In 2010 she officially joined Ewing Family Association in high hopes for breaking through her "brickwall".  She is searching  for information on Joseph or Samuel Joseph Ewing married to Mary Ann Pinkerton around 1860, and their son Harry Eugene Ewing born 1865 in Allegheny County, Pennsylvania.   She attended her first EFA Gathering this year and has joined the Board of Directors, as well as the Activities and Membership Committees.

Beth Ewing Toscos has belonged to the Ewing Family Association since 2004. Her interest in genealogy reaches back to the early 1970s when she first visited Scotland. More recently she embarked on a genealogical search for her earliest Ewing immigrant. After extensive research with the assistance of her sister, Jane Weippert Ewing, and cousin, Karen Avery, that vital fact still remains elusive. However, Beth has learned a tremendous amount about her father's family. The Ewing Surname Y-DNA Project has confirmed her family's place within the larger Ewing group.

In 2006, Beth assisted with the Association's Gathering in Fort Wayne, Indiana.

Beth and her husband, Michael, reside in Fort Wayne. Beth has a B.S. from Purdue University and has worked as a Human Resources professional for the past 30 years.

Jane and her husband, William, live in rural Cecil, Ohio where they raised three daughters.  Jane worked for over thirty years as an office manager for her Ewing-family landscape business that her father started in 1952.  A grandma of five, Jane now enjoys spending time with her grandchildren.