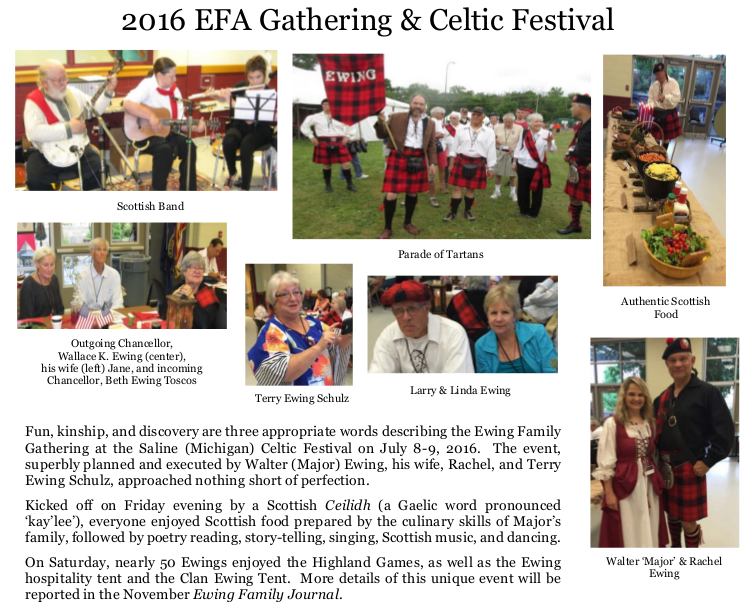 A Must-Read Book for All Ewings!

EFA Commander, John Thor Ewing, has published another book -- the new edition of R. S. T. MacEwen's volume from 1904 titled, "Clan Ewen: Some Records of its History," which is now available via Amazon.

This edition includes copious notes from Thor, which are somewhat longer than MacEwen's original text and often contradict many of his assumptions. Thor points us directly to Clan Ewen of Otter as the founder clan/family of Clan Ewing.”

A Word from the Commander

It was a real pleasure to join so many Ewings for the Gathering in July. This year’s event took place at Saline Celtic Festival in Michigan, which made quite a change from previous Gatherings, and it was great fun with lots going on at the festival itself, as well as a full Ewing schedule. It was also great to see so many of us in tartan.

My thanks and congratulations, in particular, to Walter (Major) Ewing and his family who did so much to organise this event for us all. Thank you, also, goes out to Terry Ewing Schulz, whose hard work made the Gathering such a success. Authentic Scottish fare was prepared by members of Major’s family on Friday evening, and standard American fare was prepared at the festival on Saturday by David Neal Ewing. A job well done all!

An essential part of the Gathering is the election of officers, and this year saw the election of Beth Ewing Toscos as our new Chancellor. Beth has taken a leading role in Ewing matters recently, and it’s great to have her in this role. We extend our sincerest appreciation to our departing Chancellor, Wallace K. (Wally) Ewing who presided over our official recognition as a clan in 2014.

I am delighted to announce that the first UK Gathering took place at Strathleven House, Dumbarton, on Saturday 6th August. We began with a talk about the history of the clan, before moving on to consider what sort of organisation might best meet the needs of the clan over here. Chancellor Beth Ewing Toscos wrote a letter of welcome on behalf of the EFA, with which we opened the second session of our meeting.

Strathleven House was bought by Glasgow merchant James Ewing in 1830, after which it stayed in the Ewing family until purchased by the Board of Trade in 1947. The Strathleven area was once called Kirkmichael (because there was a chapel to St Michael there in medieval times) and Ewing links with Kirkmichael-Strathleven go back to the early 1600’s, when it was home to John Ewing and to John Ewing Elder in Heiddykis of Kirkmichael. It is the Testament of John Ewing Elder (d. 1609) which refers to his plaid of ‘sax ellis of reid & blak cullerit claith’ (‘six ells of red & black coloured cloth’).

I’d also like to mention another event on the horizon, which is the Pleasanton Highland Games in California (September 3 - 4, 2016), where Larry Ewing will once again be hosting the Ewing clan tent.

The Ewing Family Association has completed a memorable 12-month cycle. Starting in April of 2015, we began participation in select Highland Games. Three appearances later – and a fourth about to occur – we’re building a formula for participation in this type of cultural celebration.

Great planning and organizing by Walter ‘Major’ Ewing propelled us to our first-ever gathering in conjunction with a Celtic festival. This is a format we will undoubtedly repeat in the future. Our 14th biennial gathering was well-attended and a lot of fun for all. Fortunately, we were able to include large doses of family history and genealogy. We even attracted some new members!

By the time this newsletter goes to press, we expect that a group of Ewings who reside in Scotland and England will have met at Strathleven House as the first of what we hope will be many ongoing Clan Ewing activities. Led by Commander Thor Ewing, our best wishes go out to our kin abroad on this historic first gathering.

Plans will begin soon for the next Family Convention to be held in Scotland within the next three years. The efforts of the Ewing family on both sides of the Atlantic will be necessary to bring the final step of electing a Clan Chief to fruition. We will look to one another to take this step together.

Two great Ewing Gathering events, one in Saline, Michigan, and one at Strathleven House, Dumbarton, Scotland, are now behind us and will be chronicled more fully in the November Ewing Family Journal.

Meanwhile, we can look forward to Bruce Frobes’ continuing history of Amy Hunter (Ewing) Patterson’s friendship with the founders of America as experienced in her Philadelphia neighborhood.

Also intriguing, Gary Murrell’s family research of his Ewing ancestors will be continued in the November issue.

All in all, there are many exciting Ewing events happening all over the world at present. Indeed, it’s a great time to be a Ewing!

John Ewing, Editor
This email address is being protected from spambots. You need JavaScript enabled to view it.
260-704-1392

At the Saline Celtic Festival, Beth Ewing Toscos was newly-elected as Chancellor of the Ewing Family Association, succeeding Wallace K. (Wally) Ewing, who had served for the past four years. In addition, Larry Ewing was elected as a member of the Board. The Board of Directors meeting held on July 9 th produced the following officers and activity coordinators:

A printable copy of the EFA Newsletter can be found here.